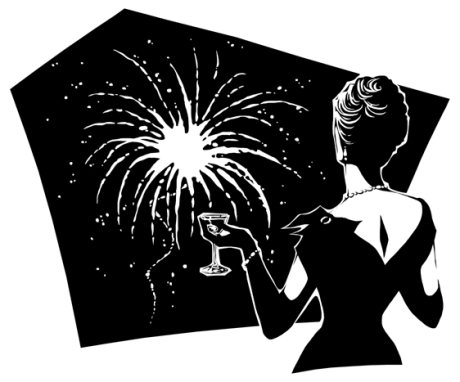 The last hint of light from the concluding fireworks faded into the blackness of the night. The small gathering had soon removed their gaze from the sky and cast their eyes about their surroundings.

“Have our hosts not returned yet?” said Miss Bartlett, as she gently fingered the muscles just above her shoulder and turned her head on an angle in an attempt to remove the rigid feeling in her neck.

“It would seem not,” observed Mr. Richards, dryly.

“Josephine went to lie down a while ago, didn’t she? She must have fallen asleep,” said Mrs. Richards.

“Yes, Victoria, thank you for stating the obvious,” said Mr. Richards to his wife in a most condescending manner, “and what of Montgomery? Still tending his business call?”

Rufus Barrymore harrumphed, “Really! This is a fine way to treat one’s guests, wandering off and abandoning them to linger in one’s back garden.”

“What can one expect from the very rich?” said Mr. Richards, directing a sly glance at Rufus.

“Well, I would never treat my guests in such a way,” protested Rufus.

“No, Rufus,” said Mr. Richards, “you would only neglect to mention that there was to be no dinner served, at your last dinner party.”

“That was a miscommunication. I’m not made of money, you know.”

“Ha! You’re made of more money than I am, or the Townsends for that matter. It would hardly have broken you to at least have provided some drinks for the occasion.”

“People with little money have no comprehension of how quickly it can be used up.”

“And people with plenty comprehend such things even less.”

“Well, then,” said Mrs. Richards, doing her best to change the subject, “Why don’t we go and seek out our hosts?”

The company made their way indoors and soon found their host, Montgomery Townsend, finishing up in his office, just as they imagined they would.

“Montgomery,” Miss Bartlett whispered, seeing that her host was still engaged on the phone.

Mr. Townsend turned in his chair, casting his eyes towards the door, and acknowledged his guests’ presence cheerfully.

Mr. Townsend placed his hand over the receiver’s mouthpiece, “Sorry about all this everyone, I’ll be with you in a moment, all right?”

The company nodded and quietly exited the room as Forbes entered with his tray to collect his master’s glass. He gingerly took it up, placing it on the serving dish as silently as possible, and then turned towards the door to leave.

Townsend did not reply with words, but mouthed something indistinguishable, with what seemed a desire to have a final word with his manservant. Forbes waited by the door, he could hear the hurried voice of Vincent Welling on the other end of the line and watched Mr. Townsend, as he fingered his brow in wearied discomfort.

“Yes, Vincent,” said Townsend, “Yes, yes, all right, I understand. Now, it’s time for you to go home, and it’s time for me to finish my party. What’s left of it, that is.”

Mr. Townsend sank back into his chair, as sounds of apologetic blather poured from the receiver, and he was forced to make continual attempts at pacification before at last being allowed to hang up.

He turned to Forbes, and sighed deeply, “I’ve emerged at last, Forbes.”

“Now then, tell me, how did my party turn out?”

“You think? Oh, no, that will hardly do,” Townsend teased, “I’ll just have to ask Josephine, if I want an honest report. Where is my wife, by the way? I didn’t see her with the lot that just came through here. Or Oscar, come to think of it.”

Just then a muffled sound of animated voices began emanating through the open door from the front hall. At first it seemed to indicate nothing unusual, but soon the voices took on a distinct quality of agitation and distress. Both men quickly moved to the hall to find a scene of disorder playing out.

“What’s this, what happened?” asked Townsend.

“What? What on earth do you mean?”

“The room is in shambles, Monty,” said Mr. Richards.

“Yes, you had best come and see it for yourself.”

The company moved quickly from the hall to the sitting room. Furniture was knocked on its side, and bits of glass from one of the French door’s broken windowpanes were scattered across the floor. For a moment, Mr. Townsend stood silently in the midst of the chaos, only able to just whisper his wife’s name.

Mr. Richards stepped forward, “We found this on the floor,” he said, holding up a pale yellow rose bud.

Townsend looked up, “A rose,” he said softly, “from Josephine’s hair.”

Everyone stood silent for several moments, as they gazed at the disarranged room in a state of disbelief. It was only moments ago that Josephine Townsend had been talking and laughing among them in the bright and effervescent way she always had. Mr. Townsend swallowed slowly, forcing himself to breathe, in quick halting gasps. At last he heaved a deep breath, taking hold of himself and the situation.

“Everyone clear the room,” said Townsend. “Don’t touch anything else, we must disturb nothing.”

Everyone was ushered out into the hall, and Townsend shut the door behind himself.

“Forbes, ring up the police immediately! My wife has been taken.”