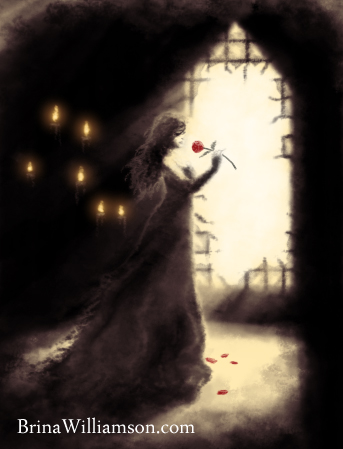 I was looking through my old art for something that would fit in a post for Halloween, and found this little sketch. It was done on the computer years ago, though I couldn’t say when, and is really a very small picture. This is literally the biggest it gets.

The story behind it is actually kind of funny, because it came into my head from misseeing what a thumbnail image actually was. The image I glimpsed the thumbnail of was nothing like this, it was a kneeling man, with a cityscape behind him, but from the light and shadows it looked to me like a woman in a long tattered dress, standing in front of a broken window.

This actually happens a lot with me. I’ll see a small picture and think it’s something else, and sometimes the image I see in my head is a lot nicer than the real image I was looking at, so I end up doing a little doodle like this one to capture what I saw, before I can’t see it any longer.

It’s like glimpsing a ghost image or something, and trying to catch it before it vanishes into the ether. Hmmm, that sort of makes it even more Halloweenish.